Hide Search
You are here: Home / Over 3,700 drink driving cases dealt with in a week 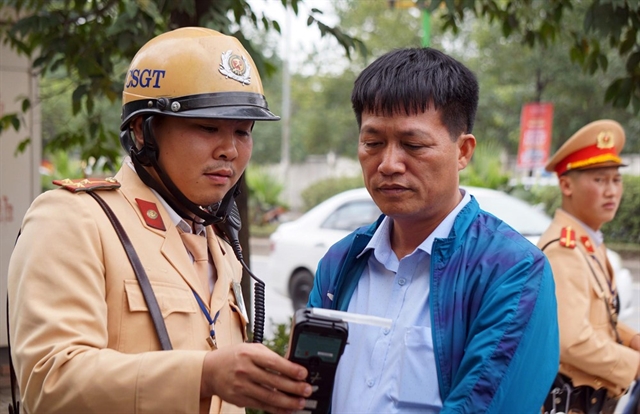 A driver is tested for alcohol level in Hà Nội. — Photo tienphong.vn

According to the Traffic Police Department under the Ministry of Public Security, localities with a high number of violations include Tây Ninh, Đắk Lắk and Bắc Giang, with 308, 214 and 203 cases, respectively.

Regarding concerns about the effect of fermented fruit or cough medicine on a driver’s alcohol level, a representative from the department said over 150 samples [from drivers that had eaten fruit] have been taken and none of them showed any elevated alcohol levels.

The alcohol level created by eating a small amount of fermented fruit or cough syrup generally dissipated two to five minutes after consumption, he said.

Lieutenant General Vũ Đỗ Anh Dũng, head of the Traffic Police Department, said drivers were allowed to request a second breathalyser test if they wanted to prove they hadn’t been drinking.

Dũng also said that under the new rule which takes effect on January 15, people could supervise or film traffic police officers at work so problems related to the settlement of traffic violations would end.

According to new regulations, car drivers will be fined VNĐ30-40 million (US$1,297-1,729) and have their driving licences revoked for 22-24 months if they are caught driving under the influence of alcohol.

Motorcyclists may face a VNĐ6-8 million ($259-346) fine and have their driving licences revoked for 22-24 months for the same offence.

A report from the National Committee for Traffic Safety revealed that the number of deaths caused by traffic accidents decreased by six persons per day since Decree 100/2019 and the Law on Alcohol Harm Prevention which bans drivers from drinking any alcohol took effect on January 1.

Traffic police will intensify their campaign to deal with violators on the road until February 14.

A study by Việt Đức Transport Research Institutes pointed out that nearly 40 per cent of traffic accidents in Việt Nam were linked to excessive drinking.

According to the Việt Nam Beer Alcohol Beverage Association, Vietnamese people consumed 4 billion litres of beer in 2017. Each Vietnamese person consumed an average of 43 litres of alcohol per year, making the country the third-largest per capita consumer in Asia, just behind China and Japan. — VNS