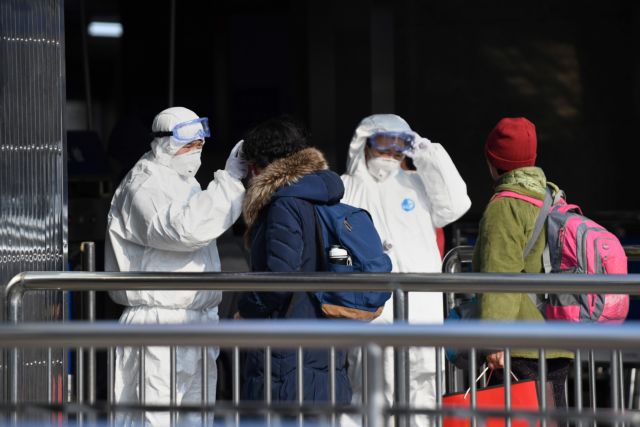 Travellers are checked by security personnel wearing hazardous material suits at the entrance to the underground train station in Beijing on Friday to help stop the spread of a deadly SARS-like virus which originated in the central city of Wuhan. — AFP/VNA Photo

WUHAN — China marked its most important holiday under a cloud of fear and gloom on Saturday as the toll from a deadly respiratory virus jumped to 41, with almost 1,300 people now known to be infected.

The Lunar New Year is normally China’s most festive time, but holiday observances across the country have been cancelled and citizens advised to hunker down in isolation at home, with over a dozen cities under lockdown.

On Saturday, when they should be celebrating the New Year, people stood in line at pharmacies to buy masks from employees in full-body protective suits and surgical gloves.

The virus has caused global concern because of its similarity to SARS (Severe Acute Respiratory Syndrome), which killed hundreds across mainland China and Hong Kong in 2002-03 and spread to a number of other countries.

The previously unknown 2019 Novel Coronavirus (2019-nCoV) has now been reported nationwide and in several other countries, with France on Friday saying three cases had been confirmed there — the first known infections in Europe.

Chinese health authorities said on Saturday the nationwide toll had jumped to 41 after 15 more people had died the day before in Wuhan, capital of the central province of Hubei, where the virus emerged.

The number of confirmed infections in China also surged to 1,287, up from 830 reported on Friday. Most of the deaths and overall cases were in Hubei.

China has launched a massive quarantine effort for Wuhan, a metropolis of 11 million people, and a dozen other cities in Hubei.

The transport bans and other measures in the affected cities cover a staggering 41 million people.

A range of Lunar New Year festivities have been scrapped, while Beijing’s Forbidden City, Shanghai’s Disneyland, and a section of the Great Wall have closed until the coast is clear.

“Usually we celebrate as a family. Now, because of the virus I’m not even visiting my parents,” said Wang Fang, a 49-year-old Wuhan native and one of many city residents to express fear over how the contagion will play out.

“It’ll be great just to be able to make it through (the outbreak).”

China’s aggressive response has won praise internationally, especially compared to SARS, in which it was accused of a slow-footed reaction and stonewalling the international community.

“China has been working very hard to contain the Coronavirus,” US President Donald Trump tweeted, hours after the United States confirmed its second case.

“The United States greatly appreciates their efforts and transparency,” he added, saying “It will all work out well.”

But the outbreak has spoiled a holiday that hundreds of millions of people eagerly look forward to each year as it is usually the only chance for a reunion of families whose members spread out across the country in search of work.

The virus also has struck at a bad time for containment, with much of the population on the move for the festival, though the timing could limit the economic impact since business activity normally grinds to a halt during the week-long break.

The World Health Organisation on Thursday stopped short of declaring a global health emergency, which would have prompted greater international cooperation.

The outbreak emerged in late December and has been traced to a Wuhan seafood and live animal market that sold a vast range of exotic animals and other bushmeat.

Wuhan has been a rendered a ghost town, but hospitals visited by AFP journalists bustled with worried patients being screened by staff wearing full-body protective suits.

As reports have surfaced of bed shortages in Wuhan, state media said authorities were rushing to build a new field hospital for the outbreak within 10 days. — AFP