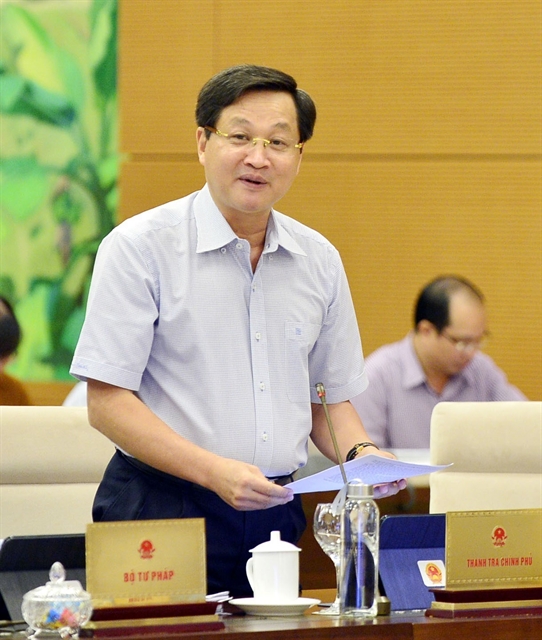 HÀ NỘI — Việt Nam is winning the war on corruption – albeit gradually.

He said corruption is on the decline, which is contributing to maintaining  the country’s political stability and strengthening people’s confidence.

The chief inspector attributed the result to good coordination between agencies in solving problems and the adoption of drastic solutions in dealing with corruption cases.

“Many [corruption] cases have been investigated further to clarify the nature of appropriation and corruption. It proved that there is no ‘restricted areas and exceptions’ in the fight against corruption,” he said.

However, Khải said the quality in settlement of a number of economic and corruption cases had not met the requirements. The recovery of assets in corruption cases was still much lower than the value of property which was illegally appropriated, he said.

Regarding the existence of the “petty corruption” which causes trouble for residents and enterprises, the NA Judicial Commitee proposed the Government clarify exactly what the problems are before offering solutions.

It was necessary to determine the responsibilities of ministers or heads of agencies involved, the committee said.

According to the committee, the punishment handed out has been strong enough.

As many 21 leaders have been punished so far this year, a decrease of eight people compared with the same period last year.

In response to voters’ complaints, the Judicial Committee suggested the Government Inspectorate, ministries of public security, justice and construction, and other agencies review the situation and set forth measures to cope with corruption fighting in the future.

The committee asked the Ministry of Public Security’s Investigation Police Department on Economic, Corruption-related Crimes and Smuggling, and Investigation Department of Supreme People’s Court to focus on detecting corruption in anti-corruption agencies and law enforcement agencies in next year’s working agenda.

The Inspectorate Director General attributed the phenomenon to the fact that some leaders of localities and agencies didn’t set good example and failed to take their duties in anti-corruption serious.

A lack of efficient checks and balances and shortcomings in supervising responsibilities of high-ranking officials were also blamed.

To promote the work, Khải said the Government would strictly abide by the Party’s regulations on corruption prevention and combat as well as the Law on Anti-Corruption and Prevention. The administration reform would be boosted and weakness in the work would be tackled.

The inspection and prosecution of corruption cases would also be strengthened, he said.

Tô Lâm, minister of Public Security, said the fight against criminals has achieved positive results while delivering a report on crime prevent and combat for 2019.

The number of criminal cases which have been solved reached 84.2 per cent, exceeding the target assigned by the National Assembly.

Crimes related to “black credit” or predatory lending have been curbed and many serious cases that sparked public concerns have been dealt with, he said.

So far this year, the country has uncovered more than 20,000 drug cases and detained more than 30,000 people. Over one tonne of heroin, nearly six tonnes of synthetic drugs and 700kg of marijuana have been seized.

While the number of criminal cases has decreased, violations still occurred.

The number of murders and child abuse cases has been increasing. Many murders or intentional attacks were carried out by people with mental illness or those affected by the use of drugs, causing concern among the public. New methods of human trafficking have been recorded, including surrogacy or fetus trafficking.

Provision of knowledge on legal documents would be strengthened together with raising the responsibility of local residents in detecting crime, he said.

The ministry would adopt measures to enhance the quality of investigation and settlement of criminals and strengthen inspections to ensure that wrongful conviction would not occur, he said. — VNS